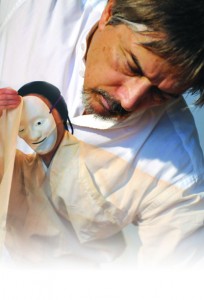 YAYOI THEATRE MOVEMENT SOCIETY (YTMS) is making preparations for the official production of Identity – Ancestral Memory which is going to be performed at Stanley Industrial Alliance Revue Stage on Granville Island in May, 2011.

This production is a collaboration with Jay Hirabayashi, a director and a dancer with KOKORO DANCE. Jay himself is a Nikkei Sansei; third generation Japanese Canadian. It’s going to be a sensational performance work.

Identity showcases various techniques; such as mime, dance, Noh play, Kyogen play, traditional Japanese dances, motion images, live koto play (a traditional Japanese stringed musical instrument), and live shakuhachi play (Japanese bamboo flute) . It is a fusion of Japanese traditional performances and contemporary dances. It is inspired by the poems and the words of Japanese Canadian artists. The Nikkei Nisei painter, photographer,and poet, Roy Kiyooka was the biggest source of inspiration. The identity of Japanese Canadians is juxtaposed with videos of interviews of people in Japan talking about identity.

YTMS presented the “working on progress” production of Identity at Centre A in Vancouver for three days in April 2010. Approximately 350 spectators came to the shows. All were impressed by the performance. In this production YTMS included some special events, such as a symposium and a related film work. The reviews in various media spoke highly of the production. The reviews appeared not only in Greater Vancouver area, but also in Ontario. It was also featured in the Toronto Nikkei Voice. The production was praised for its theme and high quality.

Yayoi, artistic director of YTMS, was moved to produce Identity when she discovered a dramatic connection between her mother’s experiences and those of Japanese Canadians. Her mother repatriated to Japan from China after World WarⅡ. Like Japanese Canadians, Yayoi’s mother suffered great hardship during and after the war. By probing the duality of Japanese Canadians’ identity, YTMS explores what identity is.

To get tickets go to Vancouvertix.com

Discover the beauty and drama of Kabuki make-up and take a trip to
a new world in a traditional Japanese kimono.

*Photography by a professional photographer

(The required time is approximately 1.5 hours.)

We are looking for volunteers for promotions, hair& make-up artists, and dressers etc
– Sakura Days Japan Fair on April 2nd and 3rd at VanDusen Botanical Garden
– Identity Ancestoral Memory on May 12th to 14th at Arts Club Venue Stage in Granville Island
These are perfect opportunities not only for the people who love theatres, arts, or Japanese Culture but also someone who is interested in seeing new people to have a great experience all together.
If you are interested, Please Cantact us.

YAYOI THEATRE MOVEMENT is looking for volunteers who would like to help such duties as promotion, writing, design, manegement, accounting and production. If you are interesting in volunteering, Please contact YAYOI.

Jan 8 to March 5, 2011
Learn how to make a Noh theatre style mask using paper mache! Seats are limited. Resister NOW!!
____________________
Information
Workshops will take place near Granville Island
on alternate Saturdays starting Jan 8 for 5
sessions with the final session March 5.
Time 10am – 3pm.
Fee $250.( including cost of materials)
Please contact Yayoi to resister
604-739-7760, info@yayoitheatremovement.ca
For further information, go to
www.yayoitheatremovement.ca
____________________
Instructor Yayoi Hirano
Yayoi Hirano has been carving traditional Japanese Noh theatre masks since 1995. Her extensive collection of masks are used in her numerous stage performances. Her technique and knowledge were instrumental in creating one of the masks for the 2009 Stanley Park Ghost Train Show. 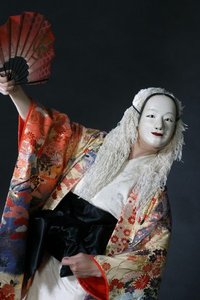