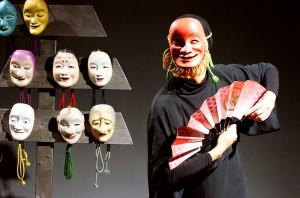 Based on a Jacques Ibert composition, “Stories” consists of ten short stories. Yayoi’s choreographic interpretation helps to bring each piece to an immediate visual reality. The stories characters themselves are realized in the faces of tendifferentJapanese Noh-style masks Yayoi has carved, but their personalities are even more vividly fleshed out in her body movements and rhythmic translation of the music’s mood.

Yayoi’s approach to build characters goes beyond the actual title of each piece, the mood of the music and Ibert’s actual diary being a significant influence. For example in “The abandoned Palace”, a half young half old mask shows how the ghost in the Palace used to be. On the other hand, in “The old beggar” she expresses in three minutes an old female beggar’s physical and deep emotional situation

Defining the style of the unjustly neglected French composer Jacques Ibert is not a simple matter. There is something of the Neo-Classicism of Poulenc or Stravinsky to him, and his understated yet keen coloration brings to mind the succinctly riant oil canvases of Raoul Dufy. Yet this collection of ten sparely evocative piano pieces also invites comparison to earlier important programmatic collections, notably Emmanuel Chabrier’s ten Pieces Pittoresques (1881) and Claude Debussy’s two books of Preludes (1910 – 13). The similarity to the latter is immediately apparent from the way in which Ibert’s titles are printed in the score — at the end of each piece rather than at the head of the title page. Debussy invented this practice in his Preludes as a way of inviting the performer to conjure up his or her own poetic imagery before being influenced by the

Ibert wrote little for the piano, depite being thoroughly at home with the instrument. His small output is nonetheless consistently on a high level, as exemplified by these miniature masterpieces. Gerard Michel defines Ibert’s use of the title Histoires as being a kind of narration to children. The texture of the pieces is at times thin, and technically some can be played by a young person. But the musical style itself demands familiarity with debonair, urbane Gallic sophistication. Some of the titles are deliberately obscure: La meneuse de tortues d’or, Bajo la mesa, La marchande d’eau fraiche, Le cortege de Balkis — all snapshots of travel to exotic locales like Tunisia and Algeria, complete with unusual encounters with the locals. The other pieces are closer to home, images of remembered people and haunting places.