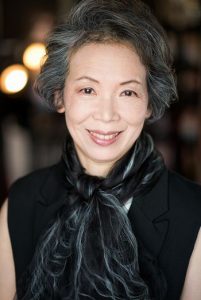 Born and raised in Japan, Yayoi has lived in Vancouver since 2002. She is a graduate of Toho Gakuen College of drama (1972), and in 1975 co-founded Mime Theatre Pierrot-kan to popularize pantomime in Japan through modern works. Over the past 30 years she has continued her study of Japanese dance and movement such as Kagura, Noh, Kyogen, Kabuki-dance as well as western dance both classic ballet and modern dance. Her mime study has been in both Decroux and Lecoq system. Very early in her career she has had a passion for teaching mime, dance and movement. In 1989, she became the first mime artist to receive the Japanese Ministry of Education Fellowship, and spent a year collaborating with mime and dance artists in Germany and Canada. In 1990, she founded YAYOI THEATRE MOVEMENT Society. Her international performances include festival appearances in Germany, Slovakia and 7 other European countries numerous Asian tours as well as five North American tours.

Her collaboration work with international artists include work with Canadian photographer Courtny Milne(1995), Japanese Jazz musician Terumasa Hino(1996), Halina Witek (Holland 1997 ,1998). For her collaboration with Bulgarian actor Nikolai Sotirov in both Japan and Bulgaria, she was given the Bulgarian Experimental and Avant-garde Performance Art Award in 2001.
Yayoi’s career as a mask carver began 1996 under the mentorship of Noh-mask Master Fujio Fujimori. Since then she has created 15 unique Noh-style masks which have all been used in various performances.

In 2005 Yayoi created a new solo work “Four Seasons” which debuted in October at the Scotia Bank Dance Centre. In 2007 she collaborated with musician/composer Wendy Bross Stuart to create “Mothers” a dance/musical celebration of motherhood. 2008, she performed in Pangaea.Arts “Life of Paper”, and presented an original “Stories” in collaboration with pianist Sara Davis Buechner at the Powell Street Festival.

In the fall of 2008, she co-created and produced “Shinju” with fellow Japanese Canadian actor Manami Hara. Interpreting a traditional Kabuki theatre story Shinju used mime and dance, both traditional Japanese and modern western with Canadian actors on stage. In May 2011, she produced and performed a dance work “Identity-Ancestral Memory” in collaboration with Jay Hirabayashi (Kokoro Dance) at the Revue Stage on Granville Island in Vancouver.

A life long dream to present a Greek tragedy in Noh-theatre style let to Yayoi’s collaboration with director Peter Hall of Mortal Coil to produce Medea/Rokujo in Nov.2013 at the Orpheum Theatre Annex.

March 2017, produced and performed OKUNI-Mother of Kabuki at Studio 1398 Collaborate with the Gershwin’s music by Sara Davis Buechner.

Then in June 1st Yayoi was a guest performer at pianist Sara Davis Buechner’s concert at Weill Recital Hall (Carnegie Centre New York). Her program was 10 short movement pieces for Jacques Ibert’s Stories using her Noh style masks. A New York Times review was very positive. The same program was repeated in April 2018 at Freer Gallery of Art (Smithsonian Museum) Washington D.C, in May at Wentworth Villa Victoria BC and in July at the “Orford Music Festival” near Montreal.

She has also worked as a movement coach for Vancouver Opera’s “Madama Butterfly”, Mortal Coil’s and Carousel Theatre.

Since 2011 Yayoi and her company have participated in the Canada Day Parade presenting a traditional Japanese festival dance “Vancouver Ondo” with over 200 dancers.

As forms of wordless storytelling, mime and music are sister arts that rarely share a stage. Yet they came together on Thursday evening at Weill Recital Hall. There, the pianist Sara Davis Buechner was joined by the mime dancer Yayoi Hirano in a performance of Jacques Ibert’s “Histoires” in which the addition of spare, precise movements and Noh-style masks deepened the music’s mystery and whimsy.
Ibert’s 10 “Histoires” (“Stories”) for solo piano were written between 1912 and 1922. They are like pages from an artist’s sketchbook, with movement titles like “The Old Beggar,” “The Crystal Cage” and “Little White Donkey.” The music reflects both the influence of Impressionism and Ibert’s background as a silent-movie pianist.
Using a different sculpted mask for each of the miniatures, Ms. Hirano accompanied Ms. Buechner with gracefully stylized pantomimes. While her fluid gestures brought to life the tableaus evoked by Ibert, she also seemed to trap them in a point midway between playful revelation and cool enigma, seeming even to comment on the limits of music’s representational powers.